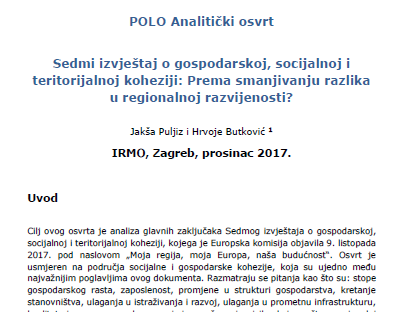 Commentary by IRMO researchers “Seventh report on economic, social and territorial cohesion: Towards reducing differences in regional development? ” (Croatian) written by Jakša Puljiz and Hrvoje Butković has been published within POLO-Cro28 project. This commentary analyses main conclusions of the Seventh report on economic, social and territorial cohesion published by the European Commission on the 9th of October 2017. Such reports are regularly being issued every three years in order to evaluate to which extent are the EU regions coming together or drifting apart between each other towards the EU average. The commentary is particularly focus on the changes recorded in Croatia and other new EU member states.